How Environmental-Political Writing Needs to Change, if Actual Positive Environmental Policy is to be Possible

Foreign Affairs Magazine: The reverse Evolution of the World’s Oceans

The article I have provided above illustrates, in my opinion, the futility of the present state of environmental-political writing and, correspondingly, the perpetual failure of all meaningful attempts at promoting sustainable environmental policy at any broad level.

Every once in a while an article on climate change or global deforestation or oceanic degradation comes out and shocks the world. Invariably, the article lists a series of apocalyptic facts about how the work of Man has negatively affected the global environment, and proceeds to propose some far-reaching policy solutions, usually solutions which the student of diplomacy or politics would immediately riddle with holes as they detailed the proposed plots’ sheer impracticability. The articles tend to conclude with a flourish of Manichaean admonitions for responsible environmental statesmanship- we must leave a better world for our children, they invariably counsel.

But they never really strike the human heart where it feels the worst discomfort. There’s a reason political moderates tend to worry about the environment but rarely speak about it- it is simply hard to connect the state of environmental degradation in which our world now finds itself- which, by the way, is probably one of the most objective facts available to anyone with a reasonable mind- with any supposed consequences in the actual day-to-day affairs of civilization. Bad air? Less fish? Warmer weather? Perhaps certain individuals, upon considering the implications of these trends, may become justly concerned, but for the mass of Mankind- who cares? It is in the fluctuations of economics and the currents of politics that Men most clearly discern their interest, and in these that they spend their cares. While a healthy state of the Earth’s environment is assuredly the TRUE, BEST interest of every being upon this planet, it is an issue too far removed from daily affairs to exert more than a mild influence over most men’s minds.

There is, however, a simple solution to this. It is the task of the next generation of writers on politics and the environment to connect the dots, to draw for the public’s consumption a clear, undeniable parallel between the daily vicissitudes of human life and the longterm devolution of Earth’s environment- to shout unequivocally to the world’s leaders and masses, Your best interest lies in the protection of your habitat! No stronger conviction than interest arouses fury in the human breast.

This task might best be accomplished by that hallowed tradition, empirical study. Plenty of articles have detailed the various trends since the early 20th Century in carbon emissions, fisheries depletion, habitat destruction, and a thousand other scary pairs of words, and stated in vague and nebulous prose, “This is BAD and something must be DONE!” Rubbish. The Green movement ought to be ashamed of itself- the world has never seen worse PR.

Instead, the next generation of writers should be actually informed on politics, and through a grand flourish of political creativity, synthesize their findings in environmental research with political evidence- they ought to take the worsening state of the environment and use it to explain, in a fair and reasonable manner, the political and economic currents of the last century, good and bad. There is likely much that can be done on this front- expanding chaos and political agitation in underdeveloped areas of the world, increasingly prominent resource competition, and a declining standard of living in even the wealthiest of countries seem to be easy areas for the said research to cover. And to ensure a complete lack of ideological fervor and a true devotion to the best interests of Mankind, these writers ought to consider, that many of the positive events which happened in the last century were, too, driven by environmental degradation- rising prosperity, the increasing connectivity of the state to the citizen, the technological booms which altered the face of the globe every couple decades- for only by analyzing the amoral facts of life can the writer rise above hackishness and snobbery into the esteemed halls of true political scholarship.

Indeed, only such writers ought to be listened to. The agitators in the halls of K Street should be shunned.

Few have tread this path thus far. Jared Diamond, in Guns, Germs, and Steel, and Collapse, paved some preliminary steps- but there is an immense amount of work still to be done, and that visionary will not be around forever. The opportunity for greatness presents itself, now, to those willing to shed their self-righteousness and take upon themselves the mantle of leadership!

As a final counsel, it ought to be noted that the glorious, perfect environmental policies, the glittering future cities of green, should be cast aside immediately as phantasmic illusions. The most successful environmental policymakers in American history- Richard Nixon and Theodore Roosevelt- have justly checkered pasts, and their heritages in environmental statesmanship are no less split. Yet they did more to advance the cause of a healthy balance between human interests and environmental stability than any others in the history of the United States and the world, and their demeanor, the Air of the Dark Knight, ought to be emulated by any seeking to transcend the flubbery winds of political discourse and enter the magnificent haven of historical significance. Nothing great is ever all good. The path is open. 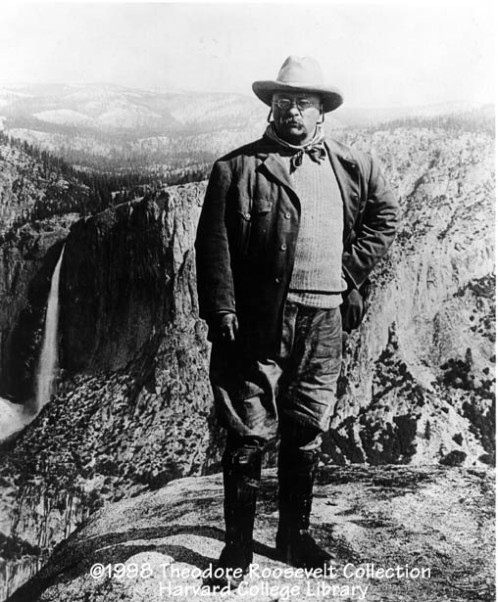