What the Chad Mayes Ouster Says About the California Republican Party 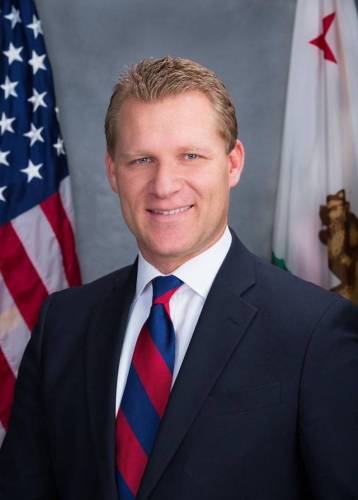 THE FALL OF MAYES

Assemblyman Chad Mayes (R-Yucca Valley) was ousted from his leadership rank by his own caucus yesterday, as the fallout of his recent political maneuvering in favor of Cap-and-Trade legislation came to a close. The Politico California Playbook this morning noted that Shawn Steel and Harmeet Dhillon- respectively the CAGOP’s GOP National Committeeman and National Committeewoman- pushed hard for the ouster and were “instrumental” in bringing it about.

The Press-Enterprise has a helpful story on this front, looking at the different perspectives and dynamics at work in Mayes’s fall from grace. One of the interesting things noted in the article was that Mayes “voluntarily supported the move to make [Assemblyman Brian] Dahle his successor…” suggesting that Mr. Mayes had calculated, by the time of the vote, one of two things: either he was sure to lose the vote and should support an orderly transfer of power, or that he had concluded he could no longer maintain order and unity among the Assembly Republican Caucus, and would therefore be impotent as its leader.

The new caucus leader, Brian Dahle, looks reasonable at first glance, perhaps a Marco Rubio-esque figure- a moderate member of the respectable establishment, with reasonably moderate views, who nonetheless enjoys the support of conservatives because he is as of yet uncontaminated by unpalatable political choices.

But how long will Dahle’s leadership last? A look at the reasons Mayes’s caucus turned against him, and why California conservatives ranging from grassroots activists to state party officials unceremoniously chanted for his crucifixion, reveals Dahle to be almost as vulnerable as Mayes, perhaps a bit less so because he hails from a more rural Northern California county.

Mayes, in short, convinced seven other Assembly members to vote for a cap-and-trade compromise bill because he thought he’d be able to extract important concessions from the Democrats on other issues (the concept of linkage.) Moreover, I suspect Mayes believes that building goodwill with the dominant Democrats is really the only way to get any legislative work done, no matter how miniscule. He also purportedly focuses his speeches and efforts on issues like poverty and inequality, rather than on the cultural and social issues- abortion, immigration, gender, etc.- that the conservatives in the party prefer.

If Mayes was ousted because he worked with the “enemy,” betraying small-government principles, how much safer is Dahle? The Press-Enterprise story describes the new caucus leader as a “Mayes ally” who “knows how to work with both parties” and is “not at either left or right extremity…” Sound familiar?

I’m not predicting Dahle’s subsequent ouster, though- I suspect he’ll learn from Mayes’s experience, that the needs and passions of the caucus that elected you cannot be neglected even as you try to steer that caucus in new directions and towards new things. In politics, everything is about balancing competing responsibilities, not achieving particular goals or promoting particular principles (an eternal verity the conservatives don’t seem to understand. They should read their Aristotle.)

And unfortunately, that decision to stay in his position of responsibility by carefully pleasing conservatives and, perhaps, following his own political preferences, will render Assemblyman Dahle incapable of advancing the image of the CAGOP’s elected officials as a responsible governing alternative to the Democratic legislature. The GOP will remain rumpy unless and until the edifice the supermajority Democrats are building collapses under its own weight. And given these same Democrats’ stranglehold over the electoral system, it’s not clear that conservatives would have a path to power even then.

But generally, the dividing line is between the “establishment” and the “populists.” I argued that Kevin Faulconer’s recent “New California Republicans” speech was not objectionable from a moderate Republican’s point of view; but neither was it sufficient, from a political strategist’s point of view. The state party isn’t going to grow by merely governing San Diego well and attempting to transpose that model northward- the diverse regions of California require their own methods of governance, and replacing the CAGOP’s ascendant conservative populism with a moderate conservatism would likely not do much to expand outside of the suburban/urban regions. (I do think it’s more likely to grow with some version of this, though, than with the current strategy of doubling down on conservative principles and attempting to convert working-class ethnic minority populations to the Gospel of Reagan Christ.)

The chief goal of Republican politicos and politicians in California is simple- expand the party. Reach out to new groups of voters, and meet them where they are. Craft new messages. Court new interest groups. Run suicidal statewide gubernatorial and senatorial campaigns to test that crafting and courting. Show the voters- who are by-and-large moderate- that we’re sane. Break out of the shell and build a new coalition, based not on strict interpretations of our core principles but on looser ones. Only when we have power can we implement anything like our vision.

The goal is not to govern, currently, simply because we do not have large enough majorities to govern anywhere but in the San Diego Mayor’s office and in plenty of rural counties. (Though participating in compromise governance with the Democratic Legislature can, quite possibly, enhance our party’s image as a governing party, making us more palatable at a local and possibly statewide level.)

The goal cannot even be to block all Democratic initiatives, simply because the vast majority of them will not be blocked- the Democrats control and will control both the Governor’s mansion and the State Legislature. Better to use the pittance of influence we have to alter initiatives sufficiently to protect business and ease the cost of living on workers, push towards incremental pension and education reforms, and the like. (And yes, the cap-and-trade legislation actually raised the price on workers, but there were concessions like the removal of various property fees. I don’t know the details here- the point is that Mayes was governing pragmatically.)

And most importantly, better to use the bully pulpit of elected office- as Mayor Faulconer evidently is trying to do- to promote a Californian version of Republicanism capable of providing an alternative to the Democrat’s gaia-worshipping, social justice-obsessed, free-spending, irresponsible version of liberal progressivism made applicable by their sheer dominance politically in this state. Lose seats, show petty infighting rather than principled discourse of disagreement, and what little aura we have further erodes.

I’m not saying be moderate because being moderate is intrinsically a good thing (though as a Catholic and a student of the liberal-conservative tradition of thought, I do think moderation, temperance, prudence, is a good thing for its own sake.) I am saying that the California Republican Party will not expand and gain power and find the opportunity to preserve, maintain, and advance a better future for all Californians if it continues to insist on anti-taxation, anti-regulation, and immigrant-bashing as the main manifestations of its core principles. Limited government and law and order are not (at all!) bad things intrinsically, and there are very good reasons to support their advancement. But supporting them to the point of political inflexibility and political cannibalism is not productive either.

I don’t think the Schwarzenegger-Faulconer model of business is particularly effective either, given that it hasn’t succeeded in or even advanced the goal of building new Republican coalitions in this state. But I do think it’s onto something, and stronger efforts and better thinking on the part of the Republican establishment in this state can make a real difference.