Death of a Scholar-Servant: Obituary for Dr. Kevin Starr 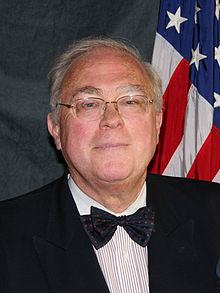 Outside of California, many Americans- even the well-read- have not heard of Dr. Kevin Starr, who died this last week at the age of 76. But inside California, particularly among those active in public life, Starr was a master- the legendary historian of California, the Californians, and the California Dream, towering above the other literature like Mt. Shasta over the Siskiyou plains. Gregory Rodriguez of the Los Angeles Times put it well- “[Kevin Starr] is one of [California’s] greatest treasures…” Starr’s unique mix of social and political history with epic, almost poetic human drama and beautiful prose makes his scholarship not only valuable in an analytic sense, but as a series of literary works, loving odes to a state whose heritage is as great as it is flawed. In our age of statistical, quasi-scientific academic history, Starr was one of few professional historians of the older, story-telling mold- and he was unquestionably one of the best.

I’m not qualified to write a comprehensive obituary of Dr. Starr- others have done so already, others who knew him much better than I did. I only have a cursory familiarity with his body of work, and I only knew him for a year and a half or so. I took his course on modern American history at the University of Southern California and said hello to him at university lectures and events over the course of the following year, until his untimely death. I cannot record what he meant to all. But I will record what he meant to me.

So who was Kevin Starr? Like his great native love, California, he was many things- a scholar and professor whose primary focus was history, but whose interests and specialties ranged from urban planning to literature. A soldier, a military officer stationed in Europe during the Cold War. An author- a bard, more like it- who wrote 11 books chronicling the epic history of the Golden State. A librarian, the State Librarian of California who served three governors- Republican Pete Wilson, Democrat Grey Davis, and Republican Arnold Schwarzenegger- for a decade before being named Librarian Emeritus of California. And an inspiration to students, scholars, and others across his life.

He was something of a partisan for California- in his magnum opus, California: A History, he wrote “Where did it come from- this nation-state, this world commonwealth, this California?” He never dreamed of secession, yet always insisted that California, aside from being the most American of American places, was a place unto itself. In some mystical way, shrouded in the aura of lore, California captured the American spirit, yet was unique. And therefore its history- aside from being fascinating- was crucial to any understanding of the broader American project. No one knew that history better than Dr. Starr.

About six months before he died, I called Dr. Starr in regards to an essay project I was considering- a geopolitical history of California, on the significance of the Golden State to America’s security policy from the westward expansion to the present. He was very supportive, and gave me advice on how to shape it. As our conversation ended he admonished me- “Go! Write it!” But the idea subsequently languished in my brain and papers for the next couple of months.

I encountered Dr. Starr for the last time at a historian’s lecture at the USC Town and Gown club, and stopped over to shake his hand. He told me to send him “the book” once I had finished it, and when I remembered what he was talking about, I hastily assured him that I would. A month later I received news that he had died of a heart attack.

Well, I owe Dr. Starr a book, and when I get around to writing the Geopolitical History of California, it’ll be dedicated to him and his memory. But that’s not all I hope to dedicate, for that’s not all I learned from him during the brief time I knew him.

Dr. Starr was of the old breed of historians, but also the old breed of scholar-servants who straddled the divide between academia and public life, taming it and riding it to great heights. Oftentimes PhD’s- particularly humanities PhD’s- will remain cloistered in the Ivory Tower, barricaded from the reality of public life. Oftentimes politicos, bureaucrats, and other public servants will never write a thoughtful piece in their career. Starr never succumbed to either fate, actively engaging the great questions of the day facing the state of California, actively serving the people of the state as State Librarian, and actively shaping its future through both his storytelling and his government service. In this regard he walked the same steps, albeit in California, as such figures on the national stage as Daniel Patrick Moynihan, Henry Kissinger, and Walter Lippmann- great intellectuals who were also great public servants. Starr’s love was California, and he lived that love through his life’s work.

In this regard, Starr was more than a professor, more than a mentor- he was a model to those of us younger folks who want to serve our country, while advancing the life of the mind for the public. He was the model of public intellect, public service, public life well-done.

In these tumultuous times for America, it’s hard to see the future Kevin Starr’s on the horizon, moderate and public-spirited scholar-servants ready to write history and serve in government. They’re out there, ready to put their minds to work. But most of them aren’t in leadership yet. Perhaps that will change in due course; but for now, those of us who so aspire to follow the path of Dr. Starr must prepare for those future days. That would be the best way to honor his memory. And Dr. Starr’s love, California, offers an insight into where we ought to put our affections- “a place, a society, in which the best possibilities of the American experiment can be struggled for and sometimes achieved.”

May a scholar-servant like Starr, who loves America the way Starr loved California, rise to chronicle the life and soul of our nation as Starr did for California. When they do, more likely than not, Kevin Starr will be in their citations.