Idiocy and Intolerance in the Campus Culture Wars

The Daily Trojan has not yet gotten back to me about publishing this as a Letter to the Editor. I publish it here to get the message out to a somewhat smaller contingent of people.

On Tuesday April 21st, the USC Students For Life had the USC Events Office put up their pro-life and anti-abortion banners on the streetlamps on Trousdale Parkway. According to spokespeople from the group, USC Students For Life had gone through all the necessary paperwork and had been approved by the administration. The banners were meant to advertise for a pro-life event called “Life: A Celebration.”

This is not an uncommon practice. Groups with various political and social agendas have advertised their events on the streetlamps, from flyers announcing African-American heritage festivals to the wordless rainbow banners of the LGBT pride movement. Though allowing groups with such agendas to advertise on university property may be a questionable policy, there’s currently nothing intrinsically unusual about what USC Students For Life did.

But someone found the pro-life banners reprehensible. Someone did not like that USC Students For Life was expressing itself and spreading its message on campus. And someone thought that a proper course of action would be to shut down Students For Life’s activism. Someone registered a complaint with the Events Office, and the office found a usually unenforced bylaw that justified taking down the banners. And whoever that someone was, they left a declaration of their intentions- a makeshift sign reading “WOMEN DESERVE THE RIGHT TO CHOOSE!” that was taped to one of the streetlight posts. 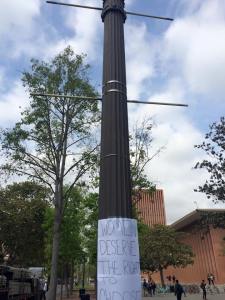 By 3:30 in the afternoon of April 21st, the banners had been taken down, and passers-by saw no pro-life message- only the pro-choice one that had been hastily made and posted.

One thing is clear to me- whoever filed the complaints to the Events Office was not at all concerned about a forgettable regulation requiring student orgs to include the name of their event on the banners they put on the Trousdale streetlamps. Whoever filed the complaints most likely possessed two things: views on abortion very different from the views USC Students For Life was expressing, and an intention, in their mind probably quite noble, to prevent the spread of ideas that contradicted their own.

This person, or perhaps this organization, thought it would help their pro-choice cause if they silenced an expression of pro-life sentiments. But they required a veneer of officialdom, so instead of climbing the streetlamps and ripping off the banners themselves, they filed a complaint to a USC administrative office and had them do it, thus using the institutions of USC to undermine the expressive liberty of an opposing student group on campus.

This is malicious, primitive, and wrong. It is naked suppression, not even gilded in the vile cloak of political correctness. The perpetrators hide in the shadows and refuse to show their shameful faces to the world, while they attack an opposing group’s right to free expression. Meanwhile, the Events Office demonstrated cowardice and submission in the face of one group’s hostile attempts to intrude upon another’s freedom.

Conservatives at college campuses oftentimes complain about being sidelined and silenced, usually self-righteously and without good reason. I normally have no sympathy for them.

But here, we see before us a clear-cut case of politically-motivated censorship of ideas. We see a situation where one group’s rights have been intruded upon because they offended some individuals’ sensibilities. Few things could be more illiberal, and few things could more blatantly betray our heritage, indeed our identity as a university, of intellectual tolerance, ideational pluralism, and free debate between competing points of view.

It boggles my mind that we have here at USC individuals whose passion for their own view of justice so strongly influences their moral thinking, that they think it is perfectly all right and indeed a moral imperative to trample all over the rights of those they deem the obstructers and the oppressors. The ends so justify the means, in their thinking, that they cast out all the decencies of discourse and embark on wild-eyed crusades to silence their opponents at any cost. Such is the definition of radicalism. I suppose I should not be surprised.

The USC Students For Life should be allowed to reinstall their banners on the streetlamps. An apology would be warranted for this gross violation of their rights by their fellow students, but any such apology would most probably be insincere.

I would advise two things for USC Students For Life to remember. First off, don’t go feeling oppressed all of a sudden and parading to the world how unfair life is to you. There is real oppression happening in countries around the world; while your current situation is illiberal and unjust, it is not fundamentally oppressive. You have ways to fight this injustice.

Second, aside from not stooping to the victimhood tactics and attitudes of so many campus activist groups, I would advise that USC Students For Life remembers what they’re fighting for in this context. Though you set out to fight for the rights of the unborn, the battle you now fight is not one pitting pro-life forces against pro-choice. Nor is it liberal versus conservative, nor traditionalist versus activist.

No, the battle you fight holds far more weight than any of those petty political squabbles. It is fundamentally an epic showdown between those who would respect the rights of others to voice their opinions, and those who would silence them in the name of justice. The principle of pluralism, of tolerance for others’ heresies, is at stake. Anyone with the guts to call themselves a “liberal” in the best sense of the term, ought to rally behind USC Students For Life’s right to express themselves, regardless of whether they agree with their cause or not.

I implore you, USC Students For Life: Fight on for the ideas you hold dear; but even more so for the hallowed liberal principle that has graced this great nation. Fight on, on behalf of respect for individual conscience and the dignity of difference.

Across the oceans, under the totalitarian regimes of Russia and China, and amidst the swirling anarchy engulfing much of the Middle East and Africa, dissent from orthodoxy is punished and views deemed dangerous are not tolerated. And these bullies who now work to censor you do the same. Their tactics and intentions are illiberal, intolerant, and un-American. Their blind pursuit of justice as they see it causes them to disregard the ideational pluralism that has made our civilization great.

Know that you are fighting for your rights and the rights of all ideological minorities, but especially those these barbarians would be most inclined to censor. You fight the good fight. I may disagree with you on public policy on abortion. But I’m on your side.

5 responses to “Idiocy and Intolerance in the Campus Culture Wars”